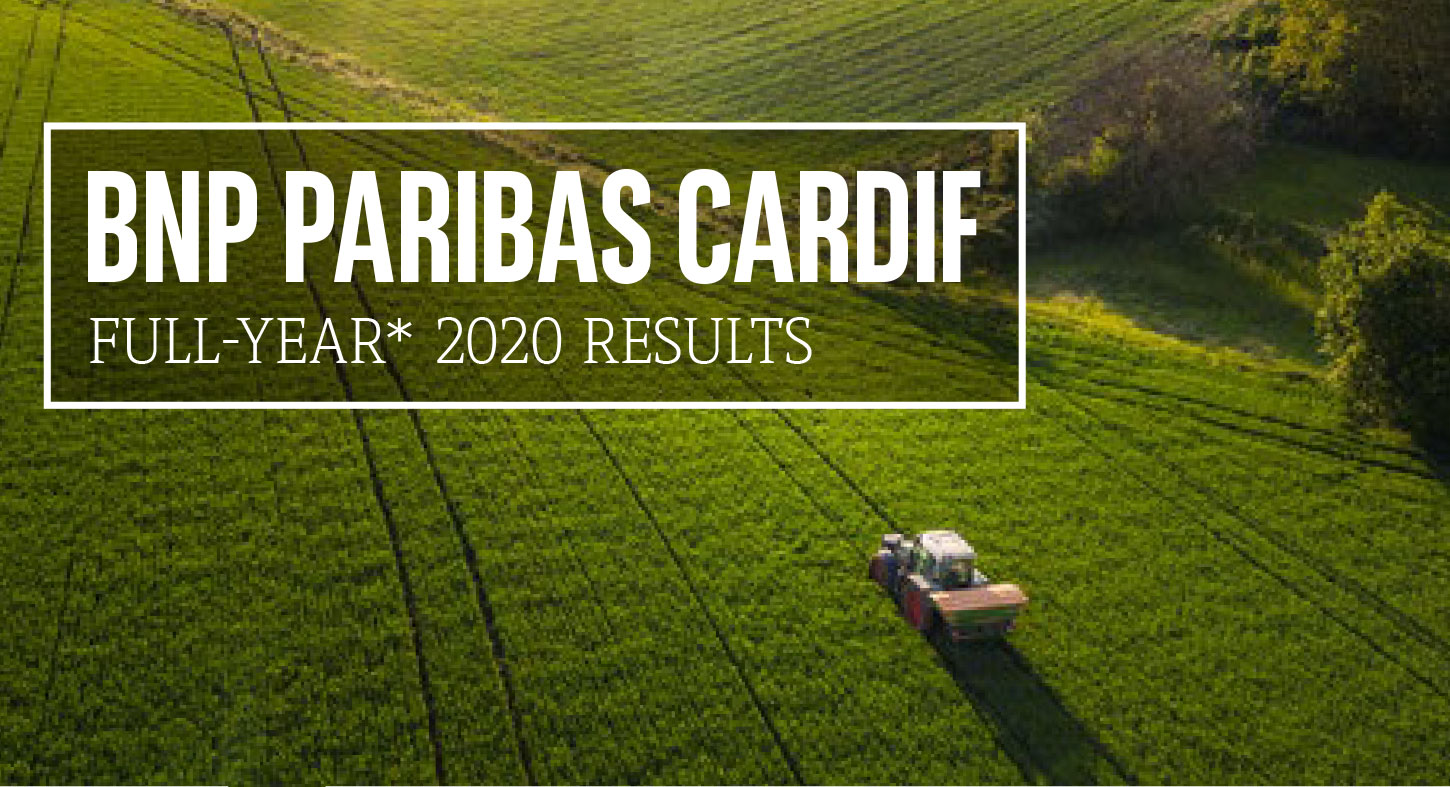 In an environment marked by the health and economic crisis, insurer BNP Paribas Cardif confirmed the resilience of its business model. The world leader in bancassurance partnerships1 and creditor insurance2, BNP Paribas Cardif was able to leverage its diversification strategy and digital expertise to surmount the challenges faced in 2020.

Global savings inflows totalled 18 billion euros at 31 December 2020, a decline of 20%4. The beginning of the year was marked by the consequences of lockdowns and market volatility. Savings activity subsequently posted good performance during the last quarter, notably for investments in unit-linked contracts.

Gross written premiums for the protection segment were 6.7 billion euros, a decline limited to just 3%4.

BNP Paribas Cardif mobilized to support its customers and partners. The company ensured business continuity thanks to rapid and agile organization, supported by a massive transition to remote working around the world. In France, 98% of staff were able to work from home during the health crisis.

To support its partners in responding to the new needs of their customers, BNP Paribas Cardif offered new coverage for risks that became especially salient during the crisis:

In addition, BNP Paribas Cardif actively contributed to support for the economic recovery in 2020. The company invested 100 million euros in the Sustainable Recovery Investment Program led by French insurers and the Caisse des Dépôts, created to support SMEs and mid-caps in the food, tourism, leisure, research and healthcare sectors in particular. The insurer also took part in a state solidarity fund created to aid small business, allocating 16 million euros.

As a long-term investor, BNP Paribas Cardif continued to support businesses and provide financing for the economy. Following the recommendations of the Tibi report, the insurer joined other institutional investors to pledge funding for tech businesses.

BNP Paribas Cardif’s support for policyholders and partners and its resilience in surmounting the crisis have been possible thanks to the insurer’s solid fundamentals. They are also the fruit of the Cardif Forward 2020 strategic plan, which was centered on diversification – of geographies, distribution channels and products – and digitalization.

Extensive automation proved an essential asset for the insurer when the Covid-19 crisis broke out:

Thanks to diversification and digitalization, BNP Paribas Cardif was able to pursue its growth in 2020 and drive very sustained commercial momentum. The insurer signed or renewed more than 100 partnerships in 2020, reflecting this dynamic business development. In Latin America BNP Paribas Cardif signed a new partnership with Brasilseg, a Brazilian bancassurance specialist, and with Financiera Oh, a subsidiary of the retail group Inretail in Peru. The insurer also renewed its partnership with Grupo Aval in Colombia. In Asia, BNP Paribas renewed partnerships with HNB in Taiwan and with Citibank in South Korea.

In France, in late 2020 BNP Paribas Cardif expanded its partnership with Welcom’, a mobile phone specialist that works with multiple operators. BNP Paribas Cardif has insured the mobile phones of Welcom’ customers against theft or damage since 2019. The insurer now provides coverage for other nomadic devices as well (laptops, tablets, etc.). Already a partner of Matmut in property and casualty insurance through Cardif IARD, BNP Paribas Cardif expanded its partnership to include savings in 2020. The Complice Vie life insurance contract, designed with AEP , has been marketed by Matmut Patrimoine since July 2020. The product is expected to be offered via the entire Matmut network from June of this year. This partnership in savings will continue to expand in 2021 with the launch of an individual retirement savings plan (branded Complice Retraite). The product will debut with high net worth clientele by this summer before being launched for the general public in 2022. A Luxembourg-domiciled life insurance contract developed by Cardif Lux Vie (Complice Vie Premium) is also planned for distribution via the Matmut Patrimoine network.